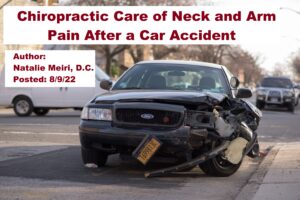 This was a 18 year old male patient with neck and left arm pain following a car accident.  This patient was involved in a motor vehicle accident while asleep as a passenger.  His car flipped over after being rear ended on the (I-95) highway.  To be HIPAA compliant, I will call him Dustin instead of his real name.

Dustin had gone to the hospital after the accident and then was released.  This was Dustin’s first car accident.  Moreover, he didn’t have any prior history of trauma or musculoskeletal pain.  Music was his major in college. And the cello instrument was impossible to practice due to his injury.  Furthermore, he had difficulty sleeping due to his pain.  When his neck and left arm injury got progressively worse, he came to see me. 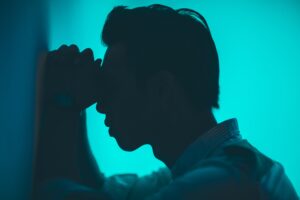 Dustin presented to my office with his neck forward in antalgia (away from pain) and guarding/holding his left painful arm with his uninjured right arm.  During the accident he was asleep, and he said, “it happened so fast”, he couldn’t remember much.  However, he remembered being “whipped around” even though he had his seat belt on as the car flipped over.  He said he didn’t hit his head, but knew he had twisted his arm. Multiple abrasions and contusions (bruises) were observed on his neck and arm.

Upon examination, I found positive tests for sprains in his cervical spine (neck), left glenohumoral joint (shoulder) and left elbow joints.  A sprain is a joint injury in which some of the fibers of a supporting ligament are torn or ruptured.  However, the continuity of the ligament (ligaments connect bones to bones within a joint) remains intact. Dustin’s thoracic spine (mid back) had a diagnosis of a strain.  A strain is an overstretching and tearing of musculotendinous tissue (tendons connect bones to muscles).

The x-rays taken in my office showed a reversed lordosis (curvature) in his cervical (neck) spine which was consistent with a sprain.  There was also an anterolisthesis of C5 on C6 vertebrae (small bones forming spinal column). An anterolisthesis is a spine condition in which the upper/front of the vertebral body, slips forward onto the vertebra below. This can often result from trauma due to a sudden blunt force, fractures, an accident or fall.  Of course with Dustin, it was due to the car accident.

The rest of the x-rays for his thoracic spine (mid back), left shoulder and left elbow were noted as “normal” findings for the x-ray report.  So fracture was ruled out.

I would order further imaging (e.g. MRI) if there was no improvement after 12 visits or possibly sooner if necessary.

Acceleration/deceleration (whiplash) injury to the cervical spine is a common mechanism of injury in patients seeking chiropractic care.  There is considerable research to indicate the “typical” phases of events following a rear-end collision.  The biomechanics of whiplash is as follows:

Phase One–When a vehicle is rear-ended, your torso (trunk of body) is forced back into the seat and at the same time moves upward. This upward movement is accompanied by straightening of the cervical spine (neck) as it is being compressed axially. Axial compression is a type of force, especially on the vertebral column, in which body weight falls centrally on a particular bone, causing bony impaction. The head and neck then begin to extend (tilting head backwards).

Phase Two–As the head and neck are extending, the vehicle has reached its peak acceleration. Energy stored in the seat from the backward movement of  the body into the seat may add more acceleration to the torso as a “diving board” effect. The upward (vertical) movement of the torso may allow ramping over the headrest, adding an element of extension. And if the driver’s foot is taken off the brake, acceleration may be prolonged.

Phase Three-Acceleration diminishes while the head and torso are thrown forward. And it may be accentuated if the driver’s foot is reapplied to the brakes.

Phase Four–As the body moves forward, a seat belt and shoulder harness (if worn) will restrain the torso. This allows the head to decelerate forward.

Lastly, ” hyperextension” (excessive movement of a joint backwards) may be the most prominent injury mechanism in whiplash. In other words, in hyperextension, the joint has been forced to move beyond its normal range of motion in extension. This then causes the tissues around the joint to be damaged.

Dustin started at 3 times a week and then moved to 2-3 times a week for his treatment frequency. The treatments included chiropractic adjustments/manipulation to his neck, mid back, left shoulder, left elbow and associated regions.  Associated regions adjusted were his left wrist and low back. Additionally, soft tissue therapy (myofascial release, pressure point and various post isometric relaxation procedures) and modalities (cold/heat therapy and electric muscle stimulation) were administered as needed. Finally, therapeutic exercises were prescribed and continued at home as well.

Dustin felt better gradually.  After a few weeks of treatment, he was able to slowly resume his cello practice activities. After many months of care, he got his range of motion and function back in his neck and left arm to fully participate in a cello concert.

A common question I get asked is, ” How does a chiropractor treat arm or leg pain that’s not coming from the spine?” My answer is, “The same way a chiropractor treats the neck or back”.  At Meiri Chiropractic, we restore normal function/alignment to your spine and extremities. For example, in Dustin’s case, he had a sprain in three areas: neck, left shoulder and left elbow.  By adjusting the various joints of the spine, Dustin’s neck/back healed. Similarly, with his extremity sprains, adjustments were delivered to his left shoulder, left elbow and left wrist joints to align his left arm.

Chiropractic helps you heal without invasive surgical procedures or drugs as in Dustin’s case. It restores your mobility, functionality and overall health. 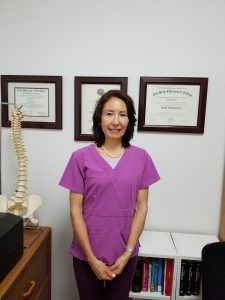 At Meiri Chiropractic we spend the time necessary to examine, diagnose and treat every neuromusculoskeletal condition and various ailments you have.  Chiropractic is a holistic and natural way to not only treat existing conditions, but to keep your body in its best working condition.  Meiri Chiropractic has been offering effective chiropractic care in Palm Beach county since 2006.  Many of our patient reviews note our excellence.  Call us today at 561-253-8984 to make an appointment or to find out more about Chiropractic Care of Neck and Arm Pain After a Car Accident.