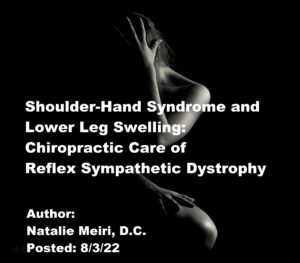 Reflex sympathetic dystrophy, also called complex regional pain syndrome, is often the result of trauma such as fractures, crush injuries, myocardial infarction, strokes, peripheral nerve (nerves located outside of spinal cord and brain) injury, or certain medication use or after surgery. Reflex Sympathetic Dystrophy is a physical disorder with persistent pain and disability.

Firstly, you will report having persistent pain and swelling following an episode of trauma.  Moreover, it will include mainly the distal (away from center of body) extremities (limbs). The level of pain is measured as one of the most severe on some pain scales.

Secondly, usually only one extremity is involved with vasomotor instability (blood vessels are constricting and dilating abnormally). Subsequently, it may lead to Raynaud’s phenomenon.  Raynaud’s phenomenon is a condition that causes the blood vessels in the extremities (limbs) to narrow, restricting blood flow. The episodes or “attacks” usually affect the fingers and toes.

Thirdly, trophic skin changes occur. Trophic is a term used to describe abnormalities in the area of pain that include primarily wasting away of the skin, tissues, or muscle, thinning of the bones, and changes in how the hair or nails grow.  This  includes thickening or thinning of hair or brittle nails.  Furthermore, when trophic changes occur to the bones, it’s called Sudeck’s Atrophy (bone demineralization).

Reflex Sympathetic Dystrophy’s first phase may be pain and swelling with an increase in sweating and hair growth in the involved area.

Next, in the second phase (3-6 months later) the skin gradually changes to a shiny appearance that is cool to the touch. In the third phase, eventually (3 to 6 months after the second phase) this may progress to atrophic (degeneration and thinning) skin.

Finally, there may be limited range of motion, weakness, or other motor disorders such as paralysis or dystonia (involuntary muscle contractions that cause repetitive or twisting  movements). And development of flexion contractures (bent joints) of the limbs may occur due to these motor disorders. Furthermore, when this occurs in the shoulder, it is referred to as shoulder-hand syndrome. 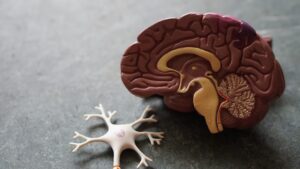 There are many theories regarding reflex sympathetic dystrophy.  Most believe that a nervous system dysfunction is at the core of this syndrome.

Definitely, reflex sympathetic dystrophy is a chronic neuro-inflammatory disorder. It occurs when the nervous system and the immune system malfunction while responding to tissue damage from trauma. Although it is classified as a rare disease, up to 200,000 people experience this condition in the United States, alone, in any given year.

Another theory attributes the disorder to “nerve sprouting” after an injury.  This is when axonal sprouts  (fine nerve processes) grow out from intact axons during healing to reinnervate the denervated muscle fibers.  Sprouting is supposed to sustain the nerve supply.  However, in reflex sympathetic dystrophy, abnormal sprouting may actually be the cause.

Our other therapies, such as soft tissue techniques, therapeutic exercise, electric muscle stimulation, ice/ heat therapies and homeopathic consultations provide relief as well. Through regular chiropractic visits, you can get pain relief and improve function.

At Meiri Chiropractic we spend the time necessary to examine, diagnose and treat every neuromusculoskeletal condition and various ailments you have.  Chiropractic is a holistic and natural way to not only treat existing conditions, but to keep your body in its best working condition.  Meiri Chiropractic has been offering effective chiropractic care in Palm Beach county since 2006.  Many of our patient reviews note our excellence.  Call us today at 561-253-8984 to make an appointment or to find out more about Shoulder-Hand Syndrome and Lower Leg Swelling: Chiropractic Care of Reflex Sympathetic Dystrophy.