This was a 17 year old male patient with neck and right wrist pain following a  car accident.  The patient was the driver of a vehicle that was rear ended while stopped at an intersection. And he presented to our office 10 days later.  To be HIPAA compliant, I will call him Zack instead of his real name.

Zack came to my office in a lot of pain. He had been in a low speed car accident. He relayed how his neck was “whipped back and forth”.  Moreover, his right wrist was injured when he was pushed forward into the steering wheel during the impact. Zack had been trying to brace himself on the steering wheel.

He hadn’t gone to the hospital after the car accident. But Zack’s pain started right after the car accident and got progressively worse.  Moreover, he was unable to participate in football at school and had difficulty sleeping due to the pain. Zack tried NSAIDS (e.g aspirin) and/or acetaminophen (e.g. tylenol) which helped very little.  Finally, his mother brought him to my office.

Zack presented to my office with his neck forward in antalgia (away from pain) and guarding/holding his right painful wrist with his uninjured left hand.

Upon examination, I found positive tests for sprains in his cervical spine (neck) and right wrist.  A sprain is a joint injury in which some of the fibers of a supporting ligament are torn or ruptured.  However, the continuity of the ligament (ligaments connect bones to bones within a joint) remains intact.

I would order further imaging (e.g. MRI) if there was no improvement after 12 visits or possibly sooner if necessary. 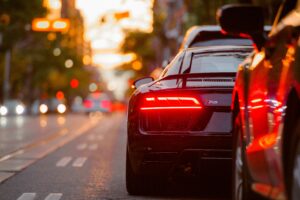 Acceleration/deceleration (whiplash) injury to the cervical spine (neck) is a common mechanism of injury in patients seeking chiropractic care.  There is considerable research to indicate the “typical” phases of events following a rear-end collision.  The biomechanics of whiplash is as follows:

Phase One–When a vehicle is rear-ended, your torso (trunk of body) is forced back into the seat and at the same time moves upward. This upward movement is accompanied by straightening of the cervical spine as it is being compressed axially. Axial compression is a  type of force, especially on the vertebral column, in which the body weight falls centrally on a particular bone, causing bony impaction. The head and neck then begin to extend (tilting head backwards).

Phase Two–As the head and neck are extending, the vehicle has reached its peak acceleration. Energy stored in the seat from the backward movement of  the body into the seat may add more acceleration to the torso as a “diving board” effect. The upward (vertical) movement of the torso may allow ramping over the headrest, adding an element of extension. If the driver’s foot is taken off the brake, acceleration may be prolonged.

Phase Three-Acceleration diminishes while the head and torso are thrown forward. It may be accentuated if the driver’s foot is reapplied to the brakes.

Phase Four-As the body moves forward, a seat belt and shoulder harness (if worn) will restrain the torso, allowing the head to decelerate forward.

Lastly, “Global hyperextension” (excessive movement of a joint backwards) may be the most prominent injury mechanism in whiplash. In other words, in hyperextension, the joint has been forced to move beyond its normal range of motion causing the tissues around the joint to be damaged. 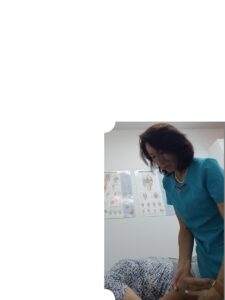 Chiropractic Care of Neck and Wrist Pain After a Car Accident: Zack’s Treatment

Zack’s condition improved slowly.  After a few weeks of treatment, he was able to resume some of his activities. After a few months of care he got his range of motion/function back in his neck, mid back and right wrist to fully participate on the football team again.

A common question I get asked is, ” how does a chiropractor treat arm or leg pain that’s not coming from the spine?” My answer is, “the same way a chiropractor treats the neck or back”.  At Meiri Chiropractic, we restore normal function/alignment to your spine and extremity (limbs) joints. For example, in Zack’s case, he had a sprain in two areas: neck and right wrist.  By adjusting the various joints of the spine, Zack’s neck/back healed. Similarly, with his extremity sprain, adjustments were delivered to his right wrist joints.

At Meiri Chiropractic we spend the time necessary to examine, diagnose and treat every neuromusculoskeletal condition and various ailments you have.  Chiropractic is a holistic and natural way to not only treat existing conditions, but to keep your body in its best working condition.  We have been offering effective chiropractic care in Palm Beach county since 2006.  Many of our patient reviews note our excellence.  Call us today at 561-253-8984 to make an appointment or to find out more about Chiropractic Care of Neck and Wrist Pain After a Car Accident.