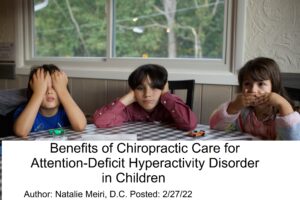 Benefits of Chiropractic Care for Attention-Deficit Hyperactivity Disorder in Children

This was a 10 year old female patient with a chief complaint of pain and parethesia (pins and needles) in her thoracic spine (mid back). Additionally, this child had ADHD (Attention Deficit Hyperactivity Disorder). She was brought for chiropractic care to address her subjective signs (acting out, inability to follow instructions, and poor home and school performance). To be HIPAA compliant, I will call this patient Bella instead of her real name.

Bella’s thoracic (mid back) complaint had come on 1 year ago insidiously (gradually without trauma).  Adopted at 3 years old, she had been malnourished as a baby at the orphanage. Bella wasn’t growing or developing as normal children do.  She was smaller physically and was a few years behind in school. Her mother and brother were both treating patients of mine. Bella’s mother thought she would benefit from chiropractic adjustments as well. Her mom knew Chiropractic adjustments get the nervous system functioning at its optimum. Your nervous system controls all other body systems. Originating from your brain, it controls your movements, thoughts and automatic responses to situations around you. And it also controls other processes, such as digestion, breathing and sexual development (puberty).

Bella’s psychologist said she was “borderline autistic”, but definitely had Attention Deficit Hyperactivity Disorder (ADHD).   Methylphenidate (Ritalin) was recommended. This drug is the primary medical approach to ADHD.  Unfortunately, common side effects are a decrease in appetite, increased pulse and blood pressure, nervousness, mood lability, growth retardation and sleep disturbance.  Bella’s parents were against Ritalin and opted for CAM (complementary alternative medicines), chiropractic and other therapies. Other therapies consisted of behavioral therapy, cognitive therapy (psychotherapy), and family counseling. 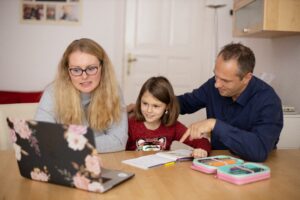 Upon examination, Bella tested positive for her neuromusculoskeletal mid back pain condition.  Moreover, even though Bella felt parethesia (pins and needles) in her thoracic spine from time to time there were no findings in the exam.

Originally, Bella’s mother was afraid Bella might become violent or aggressive in the office toward me.  She didn’t like doctors and showed aggression at times.  In contrast, Bella really enjoyed her chiropractic visits.  Bella was cooperative and well behaved in my office.

Bella’s mid back complaint improved with regular chiropractic visits within a few weeks. Similarly, after 1 year of treatment, subjective improvements were noted in episodes of acting out, ability to follow instructions, and general home and school performance.

A year later, I saw Bella skateboarding with her friends.  She told me that day, “I’m growing!” She had gone through a huge growth spurt.

ADHD has various suspected causes. These include inheritability, family environment, culture, lead poisoning, fetal anoxia (loss of oxygen), maternal smoking or use of alcohol, and many others. Although there is little debate about the existence of attention deficit hyperactivity disorder (ADHD), there are grave concerns about the overlap between normal childhood activity (especially in boys) and the diagnostic criteria for ADHD.  The resulting misdiagnoses could lead to a subsequent inappropriate prescription of medication. In one report, the proportion of children taking medication for ADHD is as high as 10% in second through fifth grades and 20% in fifth graders.

Firstly, some symptoms of ADHD are a decrease in attention span, hyperactivity, and poor impulse control that spans across developmental norms and situations. Secondly, in those who do truly have ADHD there appears to be a processing and detection dysfunction in the brain. Thirdly, even blood flow defects and dopamine (neurotransmitter) imbalances have been found as a cause.  Lastly, ADHD is associated with comorbid (simultaneously present) conditions such as dyslexia and other learning disabilities. Thus, the diagnosis can overlap with findings in patients with other conditions. Therefore, it would seem important to aid in the parental need to obtain a valid diagnosis without reliance only on meeting symptom criteria. This would include an evaluation of diet, exercise, home environment, and the “child’s self-appreciation/ esteem”.

There is not enough research on chiropractic’s effectiveness on ADHD at this time.  However, there are many case studies reporting children with attention-deficit/hyperactivity disorder (ADHD). These show the effectiveness of chiropractic care. 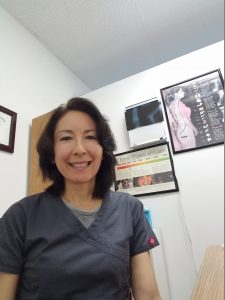 Your West Palm Beach chiropractor can adjust your spine, putting everything back in place. Realigning your spine alleviates pressure off your nerves and helps your body function at its best!

Are you looking for the best chiropractor in North Palm Beach?

Dr. Natalie Meiri can definitely help you.  Find out more about Benefits of Chiropractic Care for Attention-Deficit Hyperactivity Disorder in Children . Call 561-253-8984 today for an appointment.