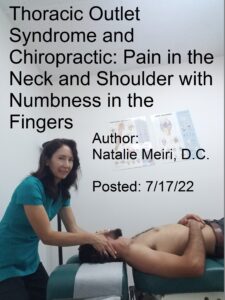 This post is about Thoracic Outlet Syndrome and Chiropractic: Pain in the Neck and Shoulder with Numbness in the Fingers. You may have diffuse (spread out) arm symptoms, including numbness and tingling. Often, you may describe the pain taking a path down the inside of your arm to the little and ring fingers. Moreover, when you do any overhead activity it is often made worse. For example, overhead throwing, serving a tennis ball, and painting a ceiling may exacerbate symptoms. Frequently, you may have weakness radiating from the neck and shoulder and extending into the arm and hand.  Even driving and typing may sometimes be difficult.

If you have Thoracic Outlet Syndrome, Chiropractic can provide relief! We’ve got some great information to share below.

Compression at the Thoracic Outlet and Causes

The term “thoracic outlet” is the area between the neck and shoulder, over the top of the thorax (chest), and under the clavicle (collar bone). It is a space in the lower neck between the thorax and axilla (armpit) through which the subclavian vein, subclavian artery, and brachial plexus (network of nerves that provides movement and feeling to the shoulder, arm and hand) travel.

Compression at the thoracic outlet can involve the brachial plexus, subclavian artery, or subclavian vein at various sites as they travel downward into the arm.  Several common sites are possible for compression.

Compression may occur at an elongated C7 transverse process (small bony projection off the right and left side of each vertebrae (interlocking bones that form the spinal column) also called a “cervical (neck) rib”.  This is an abnormality only found in 1% of the population from birth. And among these 1%, only 10% of the individuals have symptoms. Similarly, a fibrous band connecting the cervical rib to the first rib also may be the culprit in some cases.

Compression can occur at the costoclavicular area. After passing over the first rib, the brachial plexus nerves, subclavian artery, and subclavian vein all pass together underneath the clavicle. Next, they cross underneath a small muscle that runs along the back of the clavicle, called the subclavius muscle. Additionally, this muscle attaches to the front part of the first rib, where it forms a band of dense connective tissue called the costoclavicular ligament. So the costcoclavicular space between the clavicle and first rib is another potential site for compression in thoracic outlet syndrome. 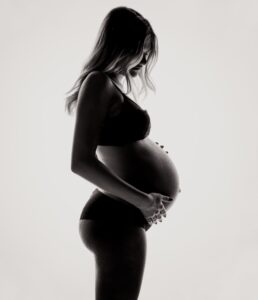 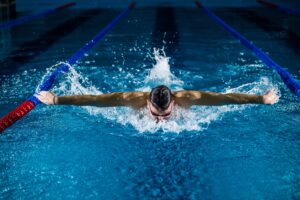 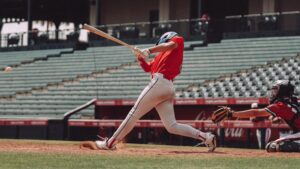 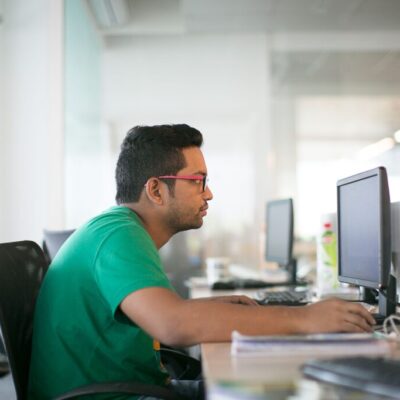 There are many causes of Thoracic Outlet Syndrome. Firstly, compression may be due to physical trauma such as from a car accident or a sports injury. Secondly, anatomical defects from birth may show symptoms later in life. Thirdly, tumors that press on nerves, though rare, are possible. Fourthly, the changes of pregnancy (e.g. postural, hormonal, swelling) may lead to Thoracic Outlet Syndrome.  Lastly, poor posture such as a forward head carriage and rounded shoulders can lead to compression. And repetitive arm and shoulder movements and activity, such as from playing certain sports also are a potential culprit. These overuse injuries can lead to swelling and fibrosis causing compression of the nerves and vessels.

Nerve conduction studies or imaging (x-ray) studies to confirm or rule out a diagnosis of Thoracic Outlet Syndrome maybe recommended.

Chiropractic manipulative treatment/therapy to the spine and extremities (e.g. limbs, ribs) are effective for thoracic outlet syndrome. Our other therapies, such as soft tissue techniques, electric muscle stimulation, ice/ heat therapies and homeopathic consultations provide relief. Indeed, postural correction, stretching of tightened muscles, and strengthening of weakened muscles is important in Thoracic Outlet Syndrome. This includes strengthening of the middle and lower trapezius and rhomboids, and stretching of the pectoralis and scalenes. Through regular chiropractic visits, you can get pain relief and improve your health without drugs or surgery!

At Meiri Chiropractic we spend the time necessary to examine, diagnose and treat every neuromusculoskeletal condition and various ailments you have.  Chiropractic is a holistic and natural way to not only treat existing conditions, but to keep your body in its best working condition.  We have been offering effective chiropractic care in North Palm Beach since 2006.  Many of our patient reviews note our excellence.  Call us today at 561-253-8984 to make an appointment or to find out more about Thoracic Outlet Syndrome and Chiropractic: Pain in the Neck and Shoulder with Numbness in the Fingers.

From Dr. Natalie Meiri’s Clinical Pearl Stories: Chiropractic Care of Neck and Arm Pain After a Car Accident Author: Natalie Meiri, D.C.        Posted: 8/9/22   This was a 18 year old male patient with neck and left arm pain following a car accident.  This patient was involved in a motor vehicle accident while asleep as […]

This post is about Thoracic Outlet Syndrome and Chiropractic: Pain in the Neck and Shoulder with Numbness in the Fingers. You may have diffuse (spread out) arm symptoms, including numbness and tingling. Often, you may describe the pain taking a path down the inside of your arm to the little and ring fingers. Moreover, […]

From Dr. Natalie Meiri’s Clinical Pearl Stories: CHIROPRACTIC TREATMENT OF FOOT AND HEEL PAIN: ACHILLES TENDINITIS AND FAT PAD SYNDROME      This was a 58 year old patient who had a chief complaint of right achilles tendon and heel pain.  To be HIPAA compliant, I will call her Roberta instead of her real name.  Roberta […]

This post is about Inflammatory Arthritis Causing Low Back Pain Chiropractic Can Help With. Inflammatory arthritis includes a group of arthritis accompanied by joint pain, swelling, warmth, tenderness in the joints, and morning stiffness that lasts for an hour. And Joints affected are many joints throughout the body at the same time.  Moreover, inflammatory forms […]