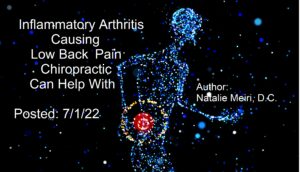 This post is about Inflammatory Arthritis Causing Low Back Pain Chiropractic Can Help With. Inflammatory arthritis includes a group of arthritis accompanied by joint pain, swelling, warmth, tenderness in the joints, and morning stiffness that lasts for an hour. And Joints affected are many joints throughout the body at the same time.  Moreover, inflammatory forms of arthritis are much less common than osteoarthritis (wear and tear arthritis), which affects most people at the later stages of life.

Firstly, inflammatory arthritis is due to an autoimmune disease. The immune system doesn’t work properly and releases inflammatory chemicals. Secondly, the resulting inflammation attacks joint tissues and can cause joint swelling, cartilage/bone damage, and muscle loss. Thirdly, the inflammatory chemicals may activate nerves around the joints and other parts of the body and lead to pain as well. Lastly, because most of the inflammatory forms of arthritis are systemic (effects entire body), symptoms related to inflammation may occur in other parts of the body, including skin rashes, eye inflammation, hair loss, dry mouth, and fever.

You may be a young man with chronic low back pain and stiffness with occasional radiation of pain into the buttocks, anterior (front of), or posterior (behind) thighs. Certainly upon rising in the morning, you may feel stiff and have some relief with mild to moderate activity. Accordingly, pain in the lower back and the associated muscle spasms are often relieved by bending forward. Therefore, untreated people often develop a stooped posture.

Ankylosing Spondylitis has no known specific cause, though genetic factors seem to be involved. Definitely, it is an inflammatory arthritis that usually affects the sacroiliac joints. These 2 joints (left and right sacroiliac joints) located in the pelvis link the iliac bones (pelvis) to the sacrum (lowest part of the spine above the tailbone).  Similarly, with Ankylosing Spondylitis, there is progressive spinal ankylosing (unification) starting from the sacroiliac joints. Further, it is characterized by enthesopathy (inflammation at the site of ligamentous insertions).

Men are affected three times more often than women. Furthermore, women are less likely to have the disease as severe. In general, the earlier you get it in life, the worse it is. With progression, there is gradual stiffening, loss of the lumbar lordosis (inward curve of the lower back just above the buttocks), increase in the thoracic kyphosis (exaggerated, forward rounding of the upper back) and decrease in chest expansion due to costotransverse (joint connecting rib and spine) involvement.  Peripheral (limb, e.g. arm and leg) joint involvement occurs 50% of the time, with permanent changes occurring 25% of the time. The peripheral joints most affected are the hips, shoulders, and knees.

You may be fatigued commonly if you have Ankylosing Spondylitis. In advanced Ankylosing Spondylitis, osteopenia (decreased bone density) is a risk factor for compression fractures. In 3% to 5% of chronic, severe cases, heart involvement may lead to arterioventricular conduction defects and aortic insufficiency.

ESR is a blood test that gives your doctor an idea of the inflammation levels in your body. An ESR test measures the rate of fall (sedimentation) of red blood cells (erythrocytes) in a test tube. Lab testing will reveal elevations in erythrocyte sedimentation rate (ESR) in 85% of Ankylosing Spondylitis cases.

HLA-B27 is a genetic test to see whether you have the protein human leukocyte antigen B27 (HLA-B27) on the surface of your cells. If you test positive for HLA-B27 then you are likely to have one of the autoimmune disorders associated with the presence of HLA-B27. Ankylosing spondylitis is one of those conditions. 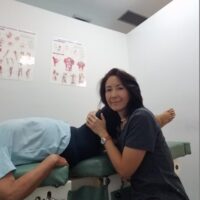 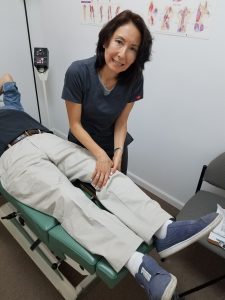 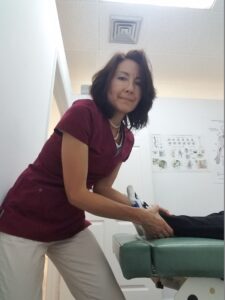 About one in six people with irritable bowel disease also has spinal inflammation/arthritis. And this is independent of the severity of the bowel disease symptoms.

The cause of enteropathic arthritis is not fully understood. But Observations have been made where joint inflammation occurs in genetically predisposed persons with bacterial gut infections. Accordingly, this provided important evidence for a possible relationship between inflammation of the gut mucosa (inner lining of gut) and arthritis. So current theories propose that genetically predisposed persons have an aberrant migration of intestinal lymphocytes (immune cells) and macrophages (white blood cells) from inflamed gut mucosa to joints.  Finally, intestinal bypass surgery may also be related to acquiring enteropathic arthritis.

Laboratory reveals HLA B27 in 90% of those with Irritable bowel disease and arthritis. 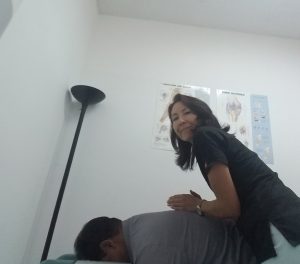 Indeed, long-term use of pain medication/drugs can cause gastric and renal (kidney) consequences.  In conclusion, chiropractic along with the use of anti-inflammatory approaches in diet and supplement recommendations are helpful for management of inflammatory arthritis.

At Meiri Chiropractic we spend the time necessary to examine, diagnose and treat every neuromusculoskeletal condition and various ailments you have.  Chiropractic is a holistic and natural way to not only treat existing conditions, but to keep your body in its best working condition.  We have been offering effective chiropractic care in North Palm Beach since 2006.  Many of our patient reviews note our excellence.  Call us today at 561-253-8984 to make an appointment or to find out more about Inflammatory Arthritis Causing Low Back Pain Chiropractic Can Help With.

From Dr. Natalie Meiri’s Clinical Pearl Stories: Chiropractic Care of Neck and Arm Pain After a Car Accident Author: Natalie Meiri, D.C.        Posted: 8/9/22   This was a 18 year old male patient with neck and left arm pain following a car accident.  This patient was involved in a motor vehicle accident while asleep as […]

This post is about Thoracic Outlet Syndrome and Chiropractic: Pain in the Neck and Shoulder with Numbness in the Fingers. You may have diffuse (spread out) arm symptoms, including numbness and tingling. Often, you may describe the pain taking a path down the inside of your arm to the little and ring fingers. Moreover, […]

From Dr. Natalie Meiri’s Clinical Pearl Stories: CHIROPRACTIC TREATMENT OF FOOT AND HEEL PAIN: ACHILLES TENDINITIS AND FAT PAD SYNDROME      This was a 58 year old patient who had a chief complaint of right achilles tendon and heel pain.  To be HIPAA compliant, I will call her Roberta instead of her real name.  Roberta […]

This post is about Inflammatory Arthritis Causing Low Back Pain Chiropractic Can Help With. Inflammatory arthritis includes a group of arthritis accompanied by joint pain, swelling, warmth, tenderness in the joints, and morning stiffness that lasts for an hour. And Joints affected are many joints throughout the body at the same time.  Moreover, inflammatory forms […]